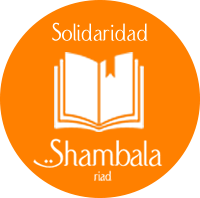 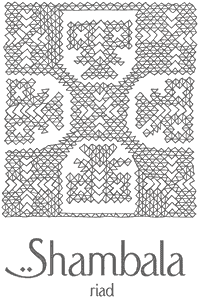 No doubt the best experience in Marrakech is when one allows oneself to explore and get lost through the many small winding streets surrounded by the ancient wall's which leads the visitor to discover the traditional smells, tastes and colours that the city is famous for.

Whilst exploring and immersing oneself in the beautiful city, one should note that the following monuments are definitely worth a visit: 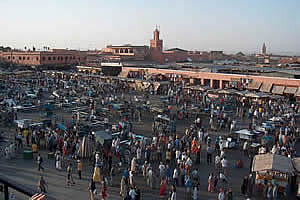 In the mid afternoon hundreds of gas lamps illuminate this space and hundreds of stalls selling all manner of goods emerge. Along side the traders who ply their trade, Story-tellers, Snake charmers, Puppeteers, Acrobats, Herbalists, even Dentists all gather there in an chaotic but strangely organised and charming way unseen anywhere else in the World

Moroccan cuisine can be tasted in any of the 100 or so food stalls which sell authentic Moroccan food, which should be tasted in the original Moroccan way, without cutlery!

Surrounding this square are several cafes with terraces at the top serving famous Moroccan mint tea whilst at the same time offering incredible views to the wonderful spectacle below, the most well known of which is the Café de France dating back to the 1950's. 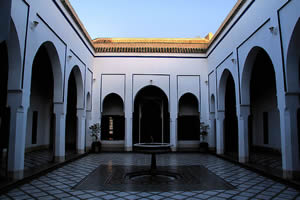 Bahia means "the beautiful" and apparently gets its name from one of the women living there. Built in the late 19th century with the intention of being the most spectacular palace ever built, the palace ended up in the hands of a former slave named Abu Ahmed Bou who became a Vizier and provided the palace with 160 rooms. All of the rooms are on one floor due to the fact that the vizier was a 'very large' man and found it very difficult to move around due to his obesity, he also wanted to make sure that his harem of four wives and 24 concubines were nearby!

Although only one third of the site can be visited, as the rest belongs to the Moroccan Royal Family, it is worth noting the exquisiteness of the gardens and courtyards (patios) of this majestic building and definitely worth a visit just for these alone.

Located next to the Djemaa el Fna square it was built in the 12th century and means "mosque of the booksellers". This is because of the many book stalls that surrounded it, with its typical construction there is a T-shaped plant that occupies one floor of 60 meters long and 90 wide.

At the top of the minaret there are four golden spheres of decreasing size, the largest being two meters in diameter. Legend has it that originally there were 3 spheres and that the fourth was donated by one of the wives of the Sultan el-Mansur Yaqub by melting down her gold jewellery as penance for having broken the Ramadan fast. We also recommend taking a walk through the beautiful gardens surrounding this monument.

As in other mosques, tourists are not allowed inside (except Muslims) however it is definitely worth visiting and seeing the mosque illuminated at night. 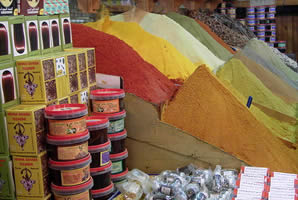 As a visitor to Marrakech, one cannot miss the experience of going to this immense market which is spread over hundreds of narrow streets and enter into bargaining or haggling with the stall holders there. And don't despair if you think that you may have gotten a better or cheaper price for that small trinket or large gift that you may have just purchased as the Moroccan stall holders are specialists in selling their wares and have no problem in communicating with you in your native language.

The vast number of items on sale such as slippers, scarves, lamps, spices, silk, jewellery, soaps, perfumes, wooden objects, nuts, dried fruits, medicinal herbs, dry cleaners, etc. are all there for you and beckon you as the challenge is to get that exclusive item that nobody else has! 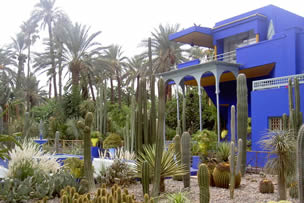 These were created in 1924 by a French painter named Jacques Majorelle who moved to Marrakech.

He was so inspired by the gardens he had created, and being a great collector of plants too, he got his inspiration from them for his other creations.

The visitor will find it a very pleasant feeling to stroll through the gardens and see the different trees, plants and cactus that populate it .

In 1980 the couturiere Yves Saint Laurent acquired the gardens. 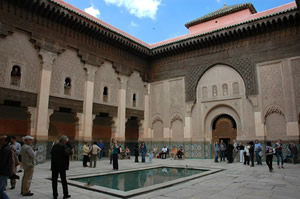 A Medersa or Madrassa is a Muslim school of education specialising in religious studies.

It is the largest madrassa in Morocco and was completed in 1565. This jewel of Arab-Andalusian architecture housed 900 students in its 130 austere and tiny cells.

On the entrance gate one can see the inscription "I was built for science and prayer for the Prince of Believers, a descendant of the prophets, Abdellah, the most glorious of the Caliphs. Pray for him, you who are crossing my door, so that his highest hopes are granted."

We strongly recommend you to see the enormous patio with white marble floors with a central fountain. Take some time to sit down and discover that for many, many years this was a serene space perfect for meditation and study.

Located in the Kasbah Mosque, the tombs were discovered in 1917 and are the only evidence that survive today in Marrakech from the Saadi Era that reigned Marrakech during the years 1524 and 1659. This is because the Alawite Sultan Moulay Smail decided to remove and destroy all Said construction. However, for fear of committing sacrilege he did not destroy the mausoleums, though he closed the cemetery section with a wall.

In the garden one can see more than a 100 tombs decorated in various mosaic patterns. The one building visitors should definitely not miss is the main mausoleum called the Hall of Twelve Columns as it is the burial place of its creator Ahmad al-Mansur and his family. 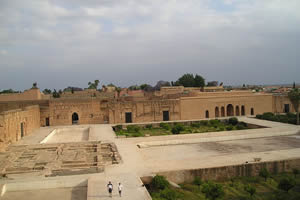 Although at present only the ruins can be seen, on the basis of the chronicles and contemporary accounts that we have, it is estimated that this palace took over 25 years to construct and housed over 300 rooms which were decorated in the most luxurious materials such as gold and turquoise. It was completely sacked by the Sultan Moulay Ismail when he moved the capital of Morocco from Marrakech to Meknes in the late 17th century.

Unfortunately, today it is a vast esplanade with numerous orange trees and worn out walls inhabited by storks. Take some time to go up to the terraces and watch the Medina from above and if you go during the month of July at weekends, the palace revives its best forgotten times with a festival of traditional music. 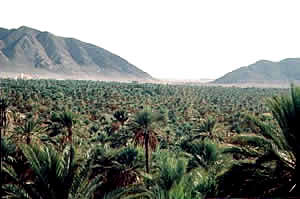 It occupies a surface area of ​​13,000 hectares and is populated by more than 100,000 palm trees planted during the Almoravids dynasty. It is used for the fruit of the dates and wood of the palm trees. Although it still maintains the sense of times gone by, it is today part of a large luxury residential development where there are hotels, stunning residences and golf courses.

Many famous celebrities have a residence in this development and we recommend that you hire a buggy and visit it as you will see a great contrast to the Medina. 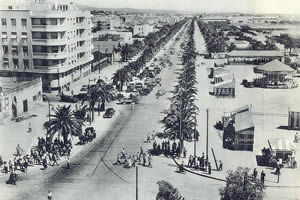 This is the new part of the city which contains new constructions of which most are apartments. This part of the city has the most prestigious shops and is full of restaurants, hotels and even nightclubs of all kind.

Put aside at least a day to walk along the Mohamed V and Mohamed VI avenues and discover that there is something else, something different in Marrakech outside the walls of the Medina. See the contrast of cultures that coexist within the same city, observe the offices of various law firms, notaries, architects, etc. all with the unique 'Moroccan touch'.